Denver’s Roostercat coffee-house is easily missed but hard to forget. You can be standing directly in front of it and not even realize it. Seriously, it has been done. I am just now starting to come here when I’ve passed by it almost every single day since I’ve moved here. When I started to get into coffee shops, I found Roostercat but accidentally ended up at Rooster & Moon without thinking twice.

Is there something I am missing about this whole Rooster thing? What does it mean? Perhaps it is derived from the term roster? Moving on…

The inside is covered with everything I love. Local art, exposed brick, Amanda approved lighting…. The chairs could be a little better but still nice. The café itself is in the shape of an L with more seating in the back. I like the layout. It’s simple but isn’t that crazy clean feel some other places have.

Way back when I first found out about Roostercat I kept seeing pictures of this rooftop. Turns out, the rooftop is actually just the patio in the front that is below the sidewalk so.. far from a rooftop. When I went to Rooster & Moon (at the time thought it was roostercat) I asked about their rooftop and if they have one. She said that they do get asked this often. Naturally when I finally made it out to Roostercat I asked them the same question ready to see this rooftop coffee shop with fire pits on it. Sounded too good to be true! It was. Much like Rooster & Moon, the barista said that they do get asked that question a lot and she wasn’t sure why. Well, after INTENSIVE investigation, I discovered the answer. The BURNING question is now finally answered. Where is everyone getting this false info from? Turns out, Roostercat’s Facebook page says… rooftop. Welp, there you go.

Real talk. I had a lot of expectations coming in here. I’ve seen it on every top 10 lists, A-List staring, top coffee shops this and that. It was errywhere. It definitely won me over. I abolsutely agree and think it’s spots on the top lists are well deserved.

Pastries: Nonexistent. In their defense, if you don’t want to go all the way with pastries no need to half bun it and get crappy pastries just so you can offer it.

BUT for all you Leslie Knopes out there, they have waffles for days. Their menu consists of Gluten Free waffles. At the register there is a fish bowl of notes locals fill out to get their personal waffle recipe as the waffle of the week. (City o city anybody? WOW) The catch is the waffle to be featured has to be 5 ingredients or less. This weeks WOW: Cheesesteak waffle. Meh. Their menu has plenty of options if you’re not into the local recipe option.

Guys, i’ve done something new. I’m pretty excited about it but definitely found a catch to keep me coming back and expanded my coffee horizons. How do you feel about coconut milk lattes? THEY HAVE IT! Story of my life, as I was ordering my classic AMVL I was stopped after the word almond. They are out. I was appalled for like a solid 5 seconds. My mind went hazy. I’m not into soy unless if I have to…. coming from the girl who ate a soy based meal last night. WHATEVER. The barista told me instead of Almond milk she could do coconut milk. I quickly took whatever look I had off my face of hearing the words “out of almond milk” and was really pumped to try a coconut milk vanilla latte. The lady behind me chimed in RAVING about how good coconut milk lattes are. I was so jazzed. I’ve never seen this at any other coffee shop before. Such a great milk alternative! Maybe this whole time other coffee shops are carrying it?

Every time I have come into Roostercat the coffee has been bomb with fab service. The baristas seem so.. normal and just the right amount of “barista hipster” and not too much. Each time I come in, I see someone familiar and I like that feeling. I can tell they remember me and it always adds to the experience.

Music: INTO IT! Headphones not needed. Music also is on the front porch. Played everything from Foster the People, The Shins, Iron and Wine, and just upbeat music I’ve never heard of before that is in the same genre. Typical coffee music for Denver done right.

What STANDS OUT about Roostercat

coconut milk OFFERED to me

-rope lighting on the outdoor patio

– Rooster Yoga every Monday night (except the first monday every month & weather pending since it’s outside and all) SERIOUSLY! You heard this right! This coffee shop has yoga classes every monday…. badass. INTO IT. *7pm*

-Outlets outside next to every table. PERFECT for those whose laptop’s batteries don’t work… ahem…

The crowd: Average. Not too hipster, not too homeless looking. Upper 20s and up. Get place

The verdict: I be back for my morning CMVL since it’s literally in the best location ever! Between 10th and 11th on Lincoln it is always on the way for me. HOWEVER, I will definitely swing by for a yoga class in the near future. Only question, is the yoga free? Only suggestion: take rooftop off your Facebook site. CHECK IT OUT, PLAYERS!

“What do you mean there’s no cats?” 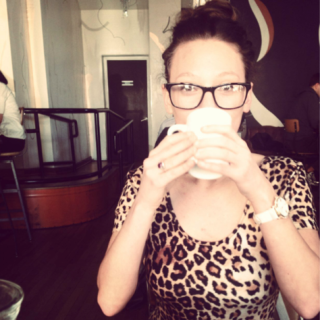